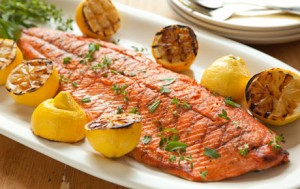 People who eat plenty of fish may have a lower risk of colon and rectal cancers, a new report suggests.

The finding comes from an analysis of 41 past studies on the link between fish in the diet and new diagnoses and deaths from colorectal cancer.

“If you eat fish very frequently, it’s not clear whether your benefit continues to go up (by eating even more),” he told Reuters Health.

And although the new study focused specifically on fresh fish, the authors noted they were unable to pinpoint what types of fish people ate or the manner in which fish was prepared in the prior studies.

“Cooking temperatures might affect the risk of colorectal cancer,” Dr. Jie Liang of Xijing Hospital of Digestive Diseases in Xi’an, China, who worked on the study, wrote in an email to Reuters Health.

Liang cited recent evidence that suggests eating lots of meat and fish barbecued or grilled over high heat may actually be tied to an increased cancer risk.

According to the Centers for Disease Control and Prevention, approximately 143,000 Americans were diagnosed with colorectal cancer in 2007, the most recent year with available data. The disease affects the large intestine and is one of the leading causes of cancer-related deaths in the United States.

For the new report, Liang and his colleagues combined results from 41 studies published between 1990 and 2011 that measured fish consumption and tracked cancer diagnoses. That included research from the U.S., Norway, Japan, Finland and elsewhere.

Overall, regularly eating fish was tied to a 12 percent lower risk of developing or dying of colon or rectal cancer, the researchers found.

That was after taking into account study participants’ age, alcohol and red meat intake, family history of cancer and other risk factors.

The protective effect tied to fish consumption was stronger for rectal cancer than colon cancer.

“Rectal cancer is much rarer, so we’d rather have a larger reduction (in risk) for colon cancer,” Gochfeld said.

The study, published in the American Journal of Medicine, was partially funded by the National Natural Science Foundation of China.

Liang’s team did not investi