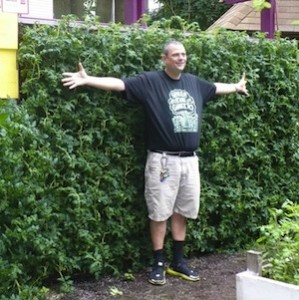 Stephen Ritz is a force of nature. He is giving a talk at the TED forum, and he’s in perpetual motion, gesticulating wildly and talking nonstop. With the energy and style of a stand-up comic, he explains to his audience his ethos for what he’s doing with his high school kids in the South Bronx:

“Kids should not have to leave their community to live, learn, and earn in a better one…Black field, brown field, toxic waste field, battlefield–we’re proving in the Bronx that you can grow anywhere.”

What Ritz and his students are growing is edible produce–and lots of it. His classroom boasts “the world’s first indoor edible wall;” he tells his students that if they’re hungry, they should just go up to the wall and grab a handful of tasty greens. They’re producing every kind of fresh vegetable imaginable–and putting them to good use. They send their produce directly to the school cafeteria, taking on what Ritz calls “the school’s biggest bully.” To illustrate his point, he puts up a picture of the cafeteria menu, which is replete with processed foods, sugar-laden snacks, and other unhealthy offerings. He makes a poignant observation:

“Seventy percent of the kids that I see who are labeled ‘learning disabled’ would not have been had they had proper prenatal nutrition.”

Ritz and his students (“the youngest nationally certified workforce in America”) also send the food they grow to neighborhood homeless shelters, outreach centers, and other organizations that reach out to the city’s most impoverished residents. Ritz takes pride in the fact that he has changed daily school attendance from 40% to 93%, and that his students’ academic performance has shot through the roof. These are kids who walk past toxic waste dumps daily, in an environment where drugs are available on every corner and where gang activity often makes the neighborhood look like a demilitarized zone. In a speech at Columbia University called “From Crack to Cucumbers,” he made the point that some of his students who were previously addicted to drugs are now “addicted” to urban farming! That speech resulted in an invitation to the White House Garden. The “Green Bronx Machine” has captured the imagination of the country. 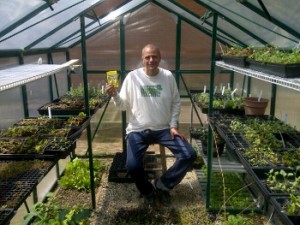 Ritz dreams of duplicating his experiment in public school urban agriculture nationwide, focusing on the country’s poorest urban centers. “The greening of America starts first with the pocket, then with the heart, and then with the mind,” he says, referring to our purchasing power and the primacy of affect — commitment at an emotional level preceding intellectual engagement. Many of his students have learning disabilities; expectations of their academic performance have traditionally been low. Bucking the odds, Ritz’ students are wowing both the school administrators and their parents with their academic achievements.

This is precisely the kind of green, sustainable initiative we need to see more of—across North America and indeed throughout the world. The greening of o