Negotiating the Dangers of Prescription Drugs

Home/Negotiating the Dangers of Prescription Drugs

Negotiating the Dangers of Prescription Drugs

The advertisements for new medications are becoming a new form of entertainment. Thanks to the FDA, we in the United States are protected against becoming unwitting guinea pigs for the pharmaceutical industry. Drug companies are required to list any and all potential side effects of new medications in their advertisements. As a result, we see actors smiling contentedly while pleasant music plays and a voice-over artist describes horrors like these:

“May lead to convulsions, coma or death.”

“Watch for uncontrolled muscle movements, which may become permanent.”

“Has been associated with suicidal thoughts and actions.”

These commercials would indeed be comical if not for the fact that such effects are all too common. According to the Centers for Disease Control and Prevention,

“Thousands of patients die each year taking medication for minor medical problems. Because of the inherent nature and risk of drugs, no drug is ever completely safe.” 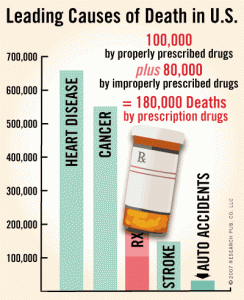 Image from the Journal of the American Medical Association

According to a recent article in the Journal of the American Medical Association (JAMA), a group of physician-researchers has analyzed thirty years’ worth of data on adverse drug reactions documented by hospitals in the United States. These researchers have discovered that some two million Americans were hospitalized in a single year for serious reactions to medications. More troubling yet, over 100,000 patients die annually due to drugs prescribed by their doctors.

As if these statistics weren’t disturbing enough, the addition of deaths from incorrectly prescribed medications in the U.S. brings the total to over 180,000. And that’s a conservative estimate.

The potential for error is great; considering the fact that physicians sometimes write prescriptions without paying careful attention to the patient’s medication history, or even those drugs they may be currently taking. Then there are the many mistakes patients themselves make by failing to read interaction warnings on the labels of their medications.

The upshot of all this, according to the JAMA article, is that Americans are actually five times more likely to die from prescription drug reactions than from an auto accident. This places the U.S. mortality rate from prescription medication below only cancer and heart disease, and well above such causes as AIDS and violent crime.

What all this means is that you must take precautions to protect yourself and your family from potentially harmful or lethal drug reactions. Don’t assume your doctor has paid careful attention to the drugs you are currently taking or have taken in the recent past. Check the labels carefully, and take drug interaction warnings seriously. Depending on your medical history, diet, and even the region in which you live, certain drugs can indeed be harmful or even fatal.

Whenever you are prescribed a new drug, take the time to ask both your doctor and pharmacist detailed questions about the potential side effects and/or interactions with other drugs, including those bought over the counter. It just might save your life!

Centers for Disease Control and Prevention

Journal of the American Medical Association

William K. Ferro is a freelance writer who lives and works in Maryland near the Chesapeake Bay. He specializes in holistic health and wellness.