How Great Are Omega 3s

How Great Are Omega 3s 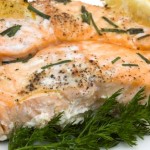 Omega 3 Fatty Acids are considered essential fatty acids, as our body needs them for normal bodily functions. However, the human body does not have the ability to produce these fatty acids; we have to get them from food. Omega 3 is found in a number of plant and marine oils. There are several types of Omega 3 fatty acids, but the two most important ones are EPA and DHA, both of which are found in fish. ALA (another Omega 3) is found in plants, which is partially converted into EPA and DHA