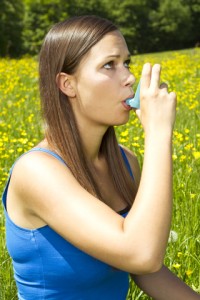 Asthma is a chronic lung disease that inflames and narrows the airways in the lungs. These airways are the tubes that carry air in and out of the lungs. People suffering from asthma have an inflammatory condition that causes their airways to become swollen. This makes them very sensitive to inhaled substances. Once the airways react to these inhaled irritants, the muscles around them tighten, which causes the airways to constrict. This in turn causes less oxygen to flow into the lungs. If left untreated, the swelling may worsen, causing the airways to constrict to a dangerous degree. The cells in the airways react to inhaled irritants by producing more mucus than usual, which also contributes to the further narrowing of the airways.

Asthma affects people of all ages, but it usually begins during childhood. In the United States, there more than 25 million people who are known to have asthma. About 7 million of these people are children.

Exposure to various allergens and irritants can trigger signs and symptoms of asthma. These may include:

Asthma symptoms range from minor to severe, and vary from person to person. Signs and symptoms include:

The key to stopping asthma attacks is to prevent them from happening in the first place. The long-term treatment plan for such a condition involves learning to recognize the allergens and irritants that trigger asthma attacks, and administering proper medication.